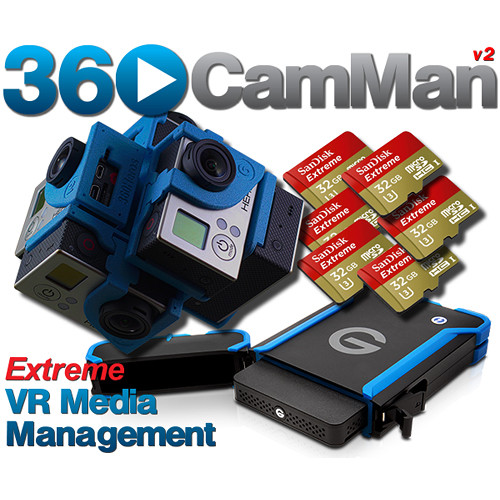 360RIZE 360CamMan? is a data file management software developed to solve the challenges of organizing files captured with multiple cameras simultaneously (as is the case with VR 360 video camera systems). A proven 360 video workflow suite, 360CamMan's 360 video file management and camera management tool sets prep and organize files for video stitching software packages. This tool converts hours of file management into just minutes and fills the gap in the spherical video content creation workflow that exists between recording data and importing it into stitching software packages.360CamMan V2 also introduces a new set of spherical video optimization tools and advanced video file analysis. The built-in Video Analyzer allows users to examine files post-shoot and determine whether each camera was operating with the correct frame rate, aspect ratio, etc. (critical elements to keep consistent in 360 video content creation). The 360 video conversion tool set features file optimization, 3D side-by-side file creation and a video sync tool for frame syncing data from multiple cameras. 360CamMan has been developed as a camera agnostic solution in an effort to share its tools with the entire VR content creator community. The software is fully compatible with any of the multi-camera 360 video solutions on the market as it supports standard six, seven and 10 camera configurations as well as 12, 14 and 16 camera 3D configurations. 360CamMan's ability to integrate with a wide variety of 360 video camera systems and camera types (360CamMan supports GoPro cameras as well as many other camera models) means VR filmmakers can take advantage of its workflow tools regardless of their camera hardware preferences.