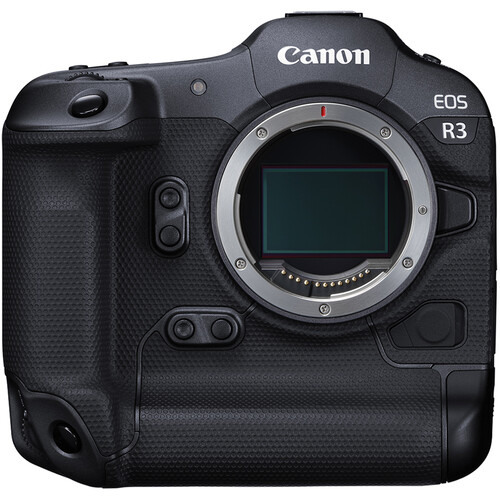 Built for speed, versatility, and reliability, the Canon EOS R3 combines the technology from their mirrorless EOS R system with the robustness and performance you'd expect from a flagship DSLR. Revolving around a new full-frame stacked sensor, updated AF performance, and refined body design, the EOS R3 is first 3-Series camera since the film era and plants itself as a fast-shooting, flexible, and contemporary mirrorless camera.

The R3 is also the first EOS R-series camera to feature a built-in vertical grip, making it an ergonomic choice for long shooting times and for seamlessly switching between horizontal and vertical shooting orientations. The rugged body design also incorporates a high-resolution 5.76m-dot OLED EVF and a 3.2" vari-angle touchscreen LCD, along with dual memory card slots, wireless and wired connectivity, and an updated Multi-Function Shoe design for expanded accessory compatibility.

An updated DIGIC X complements the new sensor design with capable processing and the ability to perform simultaneous high-speed tasks, such as 30 fps high-speed shooting while performing AF and AE readings before each frame. The processor also helps to realize a broad sensitivity range from ISO 100-102400, which is expandable to ISO 50-204800, for working in a broad variety of lighting conditions.

A main benefit of the stacked sensor design is a highly usable electronic shutter function that is able to shooting continuously at up to 30 fps, for up to 150 raw frames, with virtually no rolling shutter distortion. When working in manual or shutter-priority modes, the top shutter speed is 1/64,000 sec and flash sync is even possible with an electronic shutter, up to 1/180 sec. This versatile shutter function is inherently silent, but can be paired with a choice of audible shutter noises to go along with each shutter click to make it easier for subjects to recognize when a photo has been taken.

A manual shutter is also available, and offers a top continuous shooting speed of 12 fps, with a buffer of more than 1000 frames, along with a top flash sync speed of 1/250 sec.

Also contributing to notable video performance, the 24MP full-frame sensor offers high-res 6K raw 12-bit internal recording and uncropped 4K 120p 10-bit recording with Canon Log 3. Both 6K and 5.6K recording areas can also be used for oversampled DCI and UHD 4K shooting with improved sharpness, reduced moiré, and lower noise. HDR-PQ recording is possible, too, for in-camera HDR production and external recording, via the HDMI port supports a clean 4K output at up to 60 fps. All-I, IPB, and IPB Light compression options are available, along with the ability to use Dual Pixel CMOS AF II when shooting at up to 6K raw. Unlimited recording times are possible, too, and the R3 features both mic and headphone ports, as well as a micro-HDMI Type-D port for clean output to an external recorder.

An improved Dual Pixel CMOS AF II system features 1053 automatic AF points, which cover the entire sensor area, for faster, more responsive, and more precise focusing performance. This upgraded phase-detection focusing system also has enhanced subject detection and tracking, with the ability to intelligently recognize eyes, faces, heads (including helmets), animals, and vehicles and tracking will automatically lock onto these subjects and maintain sharp focus throughout burst captures. Dual Pixel AF II's low-luminance limit has also been improved to focus down to an impressive -7.5 EV for accurate focusing even in nighttime conditions.

New to EOS digital cameras, Canon is re-introducing Eye Control AF with the R3. This popular feature from the film era has now been refined and tuned to work in conjunction with Dual Pixel CMOS AF's intelligent focusing capabilities. Eye Control AF essentially allows shooters to use their eye to initiate where the focus point is simply by looking through the electronic viewfinder, and then the camera will take control using subject tracking and detection to keep the sighted subject in sharp focus.

An In-Body Image Stabilizer (IBIS) corrects unwanted camera shake when shooting handheld, helping to shoot handheld in low-light conditions and reduce shake when recording videos. This 5-axis system can be also used in conjunction with lenses featuring optical image stabilization to compensate for up to 8 stops of camera shake depending on the specific lens in use.


What is SSEPhotoVideo.com's Shipping Policy?
At SSEPhotoVideo.com, almost all of our cameras, drones and accessories ship free. If you want, for a little extra any item can be expedited so you can start using it right away. Not in United States? Not a problem, we can also ship to you!