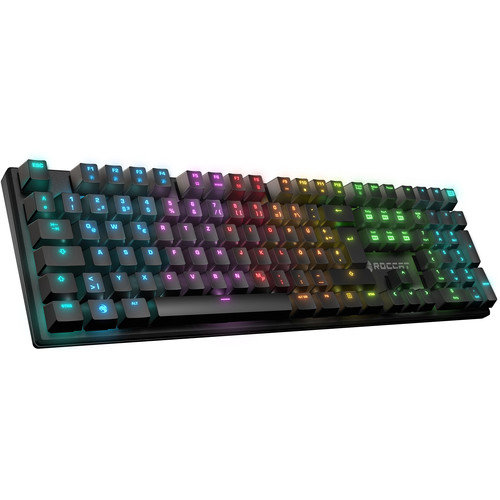 Built using a compact, frameless design, a metal housing, and Cherry MX Brown switches, the Suora FX RGB Backlit Frameless Mechanical Gaming Keyboard from ROCCAT consists of durable mechanical keys mounted on a robust base. It connects to your system using a wired USB 1.1 connection and features 16.8 million colors of RGB-illuminated backlighting that includes wave, breathing, ripple, and solidly lit modes. Other features include anti-ghosting via N-key rollover, six programmable macro keys, a 1000 Hz polling rate, a lifecycle of 50 million keystrokes, a game mode button, and multimedia functions. ROCCAT's Suora FX is compatible with Windows 10, 8, and 32/64-bit versions of Windows 7. So that the appropriate drivers may be downloaded, an Internet connection is required.General FeaturesCherry MX Brown SwitchesMechanical keyboards utilize a different type of key switch technology for a more durable and unique typing experience. The Cherry MX Brown switch has an actuation force of 45g and offers a small tactile bump when pressed, letting you know that the key has registered. This can be useful for typing or preparing for a movement while gaming. Unlike Cherry MX Blue switches, these do not have an audible "click" mechanism, allowing for a quieter operation. Noise generated from this keyboard will be from the key either springing back into place or "bottoming out" ? making contact with the back plate after a particularly hard press.16.8 Million Color IlluminationConfigure the theme of your Suora FX in a unique style thanks to its illumination system. Choose from 16.8 million vivid colors and a plethora of visual effects to suit your mood. Use the F1-F4 keys to quickly toggle through a variety of lighting FX presets, including wave, breathing, ripple, and solidly lit.Compact and FramelessThe Suora FX features a design that is entirely frameless. No palm rest, no thick border, and no thumb keys. This raw design lets you get closer in touch with the action, for fast and distraction-free gameplay. While your enemies are tying their fingers in a knot while they're lost in a sea of keys, you'll be one step ahead with your control.Anti-GhostingIt isn't much good having an intuitively designed keyboard built for speed if the keys can't keep up with the action. The Suora FX rocks an anti-ghosting matrix that helps ensure every keystroke will be registered, time and time again, thanks to its 1000 Hz (1 ms) polling rate.Solid and DurableIf you play hard, you might be worried that your devices won't be able to last the distance, but the Suora FX has a compact and frameless build that'll safely see you through war after war. It features a robust aluminum housing that provides a consistent gaming platform and its solid construction is complemented by tough mechanical keys with a 50 million keystroke lifecycle.