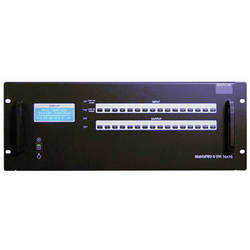 The MatrixPRO-II 16x16 DVI Router from Barco is an HDCP compliant video signal matrix router that can switch any of the 16 DVI inputs to any or all of the 16 outputs. Any input source, such as a DVD player, Blu-ray player, or a computer with high-resolution graphics, can be routed to a DVI or HDMI (via an optional adapter) output digital display.

The router accepts input resolutions from 480p up to 2048x1080 and 1920x1200. Each input is re-clocked as it passes through the router to maintain the DVI signal strength. Each channel can be programmed with unique EDID information based on the system requirements. In addition to the 16 outputs, the router features a monitoring output to which any input can be routed to and allows you to monitor and verify the input signal before it is switched to the output.